The cape of Vasilievsky Island is called “a spit” (arrow) because of its shape (it sticks out into the Neva River in the shape of a spit and divides it into two estuaries. The spot ranks as one of the most prominent architectural sights in Saint-Petersburg.

The most beautiful panoramic view of Saint-Petersburg!

The architecture ensemble of the eastern part of the Vasil Island was completed in the first third of the 19thcentury, when the port was here. All the buildings catered the needs of the port.

In one of them there is the Zoological museum. There you can find staffed mamonts found in the area of permanent frost. There are 8 museums only on the point of Vasil Island. N St-Pb. we have over 100 museums and permanent exhibitions.

When in 1712 the capital was transferred from Moscow to St-Pb., the city was growing fast and here a large trading port was located. Here was a harbor till the middle of the 19th century. Than the port was moved down the river where it’s situated now. 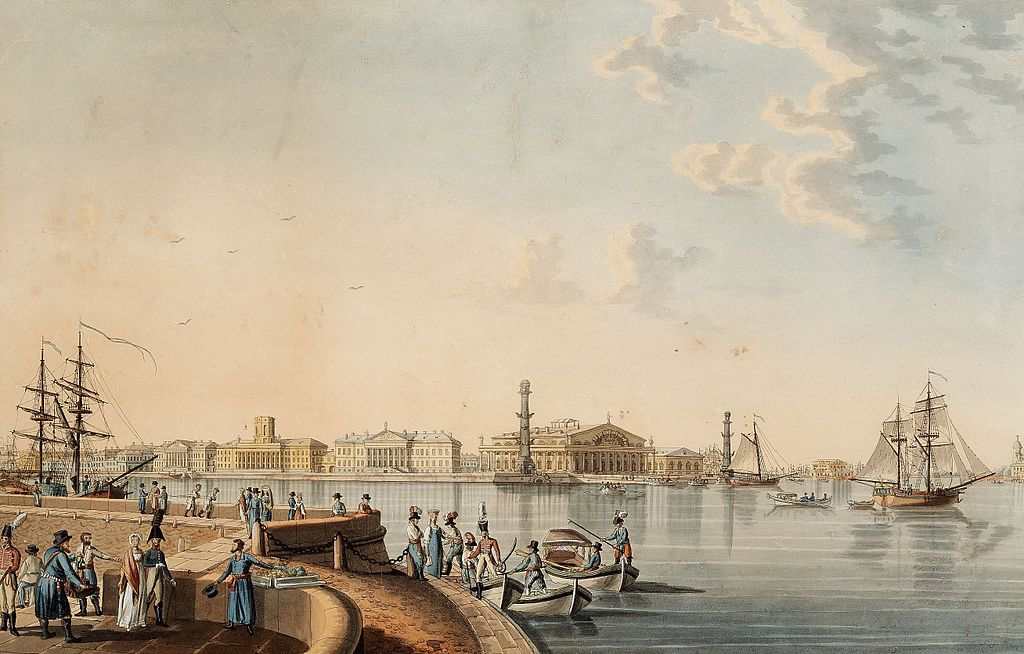 The two almost a hundred feet high redbrick Rostral Columns were established on the Spit in 1810 by an architect Toma de Tomon as a symbol of the naval supremacy of the Russian Empire and in honour of the Russian fleet victories. Formerly they were used as lighthouses.  The shafts of the columns are decorated with (the sculptural images) models of prows (rostra) of enemy ships. The name comes from Latin word “rostrum” which means prow. It was an old Roman custom to decorate the triumphal columns with prows of enemy’s ships.

(The five meter high allegoric statues installed at the foot of each column embody) At the base of the columns there are the allegorical figures of the four main Russian rivers: Volga, Dnieper, Neva and Volhov. The Columns were designed as lighthouses as well and in 1957 the natural gas was laid up to the stone lighting cups at the top of each column. Nowadays the columns are burning only on the occasions of national festivals.

Toma de Tomon designed the austere columns to highlight the limpid Classicism of the Stock Exchange building erected on the Spit just behind the green square bordered from the Neva River by granite fence and a long row of trimmed trees. The building was set up on a man-made mound protruded into the river at 120 meters ahead from the natural coastline. The porch with 44 snow-white Doric columns leads to the sea-green facade decorated with impressive sculptural groups of allegorical figures of Neptune with Two Rivers and Navigation with Mercury and Two Rivers. Nowadays the Central Naval Museum occupies the building. 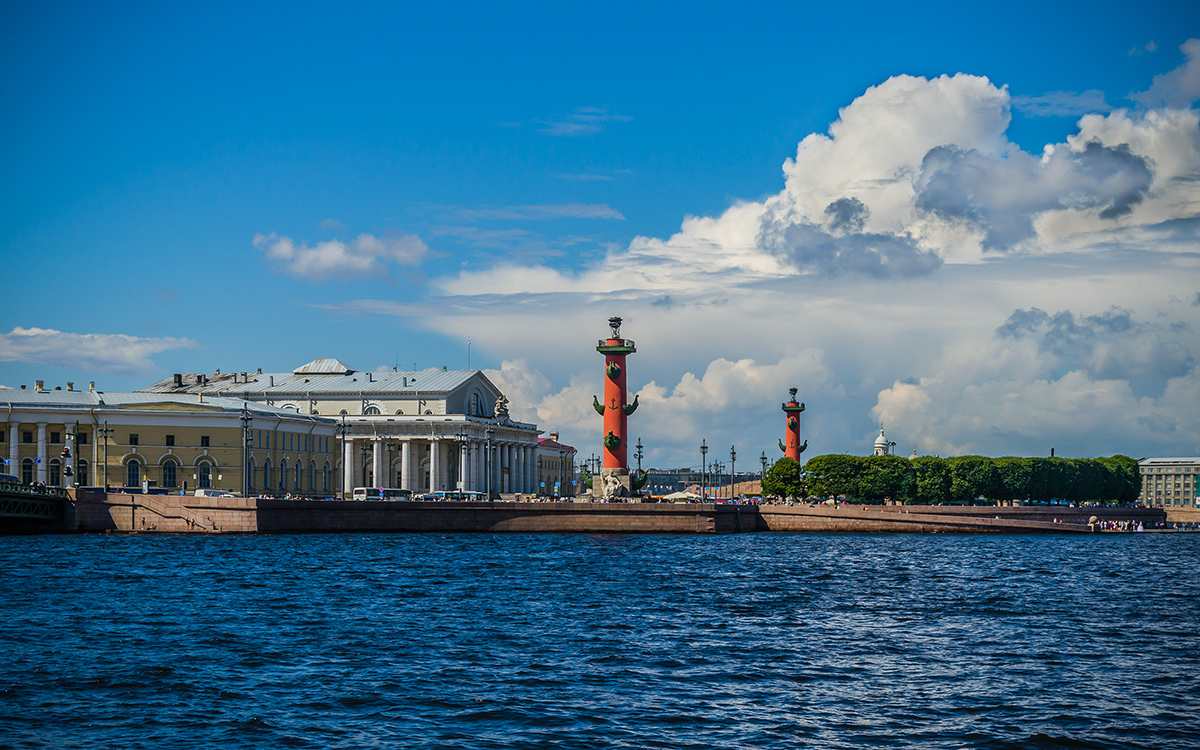 Peter the I was chosen Vasil Island to be the administrative, scientific and culture center

When Peter the I founded the city Vasil Island was chosen by him to be the administrative, scientific and culture center of the city. But not until the second half of the 19th century the Neve River hadn’t permanent bridges. So Peter the I had to move his offices to the main land, as it was inconvenient to have the administrative office center on the Island.

All our city tours include stop on the Spit of Vasilievsky Island. We’re sure that you’ll admire the lively view on the Palace Bridge, the Hermitage, Peter and Paul Fortress and of cause grand Neva River flow….