Saint Petersburg was founded in the Neva river delta during a very stormy period in Russian history at the beginning of the 18th century. The Neva River had always been a very important waterway. It was part of the “Great Rout”-from the Varangian lands to Greece.

Peter the great decided to “open the window to Europe’

Many European countries tried to capture these lands many times during the Middle Ages. At the beginning of the 17th century the Swedes managed to annex the lands along the banks of the Neva River. In order to block the Baltic Sea they founded the Nienschants fortress at a place where the Okhta River flows into the Neva River. 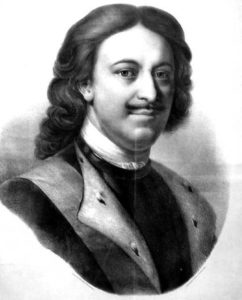 Russia was totally cut off from the Baltic Sea and prevented from normal economic and cultural links with Europe. When Peter the great ascended the throne he decided to return the age-old Russian lands to “open the window to Europe’. He started a war with Sweden. It took 21 years (from 1700 to 1721) after the Russian troops had captured the Swedish fortress Nienschants in 1703, Peter commissioned to build a Russian fortress on Zayachy Island in order to protect the conquered lands from Swedish attack. On the 16th of May [new style: May 27], 1703 the first stone of the fortress was laid. Peter the Great named it St. Petersburg after his patron saint.

Peter the Great was an outstanding statesman and one of the most prominent figures in Russian history. His reign started an age of radical reforms of the political, cultural and economic systems of Russia and enabled the country to transcend the isolation and become a part of European civilization.

The foundation of the new city at the mouth of the Neva River was one of Peter’s most significant acts. In 1712 St. Petersburg became the capital city. It played a special role in the development of economic and cultural relations with Western Europe.

For Russia itself the city became an outpost of Europeanized culture. St. Petersburg was built under onerous conditions. The lands were practically deserted. The land was low-lying, damp and marshy. There was a shortage of building material, workmen and foodstuff. But in spite of all the difficulties the city grew rapidly. Peter compelled thousands of peasants and working people, and hundreds of merchants and noblemen to move to St. Petersburg.

The area between Tsarina Meadow [now the field of Mars]and the Admiralty was the German Quarter, where many foreigners invited by Peter the Great lived. The Marine settlement was to the south and west of Admiralty. The Moscow settlement emerged east of the Fontanka River. The first industrial enterprises were erected west of the Moscow settlement. They included the Foundry Yard for the casting artillery, and the Armory, which were close to one another, a special Shipyard for the construction of small private ships.

The development of St. Petersburg and its architecture reflected Peter’s reforms. Those reforms were designed to integrate Russia into European civilization. Architects, engineers, painters, sculptors, gardeners and experts in applied art were invited from abroad to teach West European techniques.

St. Petersburg has had several names from its foundation. The original name St. Petersburg was given to the city when the first stone of the fortress was laid. In 1914 when the First World War (WWI) started the German sounding name was changed to the Russian sounding name Petrograd. The new name existed for only 19 years and in 1924, when Lenin died this city was renamed in his honor as Lenin’s political activities were strongly associated with this city. In 1991 the original name St. Petersburg was returned to the city since Lenin wasn’t popular anymore. At the same time many streets and squares in the city were given their original names. One of the unofficial names of the city is the Northern Venice. This city is situated on the islands like Venice. There used to be 101 islands in the city. Since many canals were filled in with earth in the 19th century, nowadays there are 42 islands.

One of the most famous names of the city is the “hero city”. This was the first city in Russia with this title. Leningrad underwent 900 days of hardships and starvations as well as severe artillery shelling during WWII. The city lost almost half of the population-1’225’000 people. The city was besieged by Nazi. During the first air raids the largest food stores were destroyed. There was no food, no electricity, no running water as well as heating. Over 10’000 buildings were destroyed. But the city survived and didn’t let the Nazi to capture the rest of the country.

St. Petersburg is generally recognized as one of the most beautiful large cities in the world. Its main feature is numerous architectural styles, borrowed from European architecture and transformed according to Russian climate and local construction materials.